Q-Switched ND Yag Laser works by shattering the tattoo pigment causing it to be removed out of the body through the lymph system. The colours that the laser can remove are: black, blue, black, red and brown

Many physicians consider the use of lasers as one of the best methods of tatto removal. Today, the Q-Switched Nd: Yag is the most frequently used laser for the removal of unwanted tattoo pigment. Other lasers include the Ruby, KTP and Alexandrite lasers. Because different lasers are better for different tattoo colors, consequently, multi-color tattoo removal almost always requires the use of two or more laser wavelengths. Tattoo removal lasers are usually identified by the lasing medium used to create the wavelength (measured in nanometers (nm)).

At EMERGE SKIN AND LASER, we use Q-Switched Nd: Yag laser for tattoo removal with 1064 nm and 532 nm wavelength which covers a wide vaiety of colors.

The 1064 nm NdYag is an infrared laser and is absorbed by all dark tattoo pigments and is the safest wavelength to use on the tissue due to the low melanin absortion and low haemoglobin absorption. This is the wavelength of choice for tattoo removal.

532 nm-Nd-Yag is a green laser is attracted to red, orange, some purple and pink. 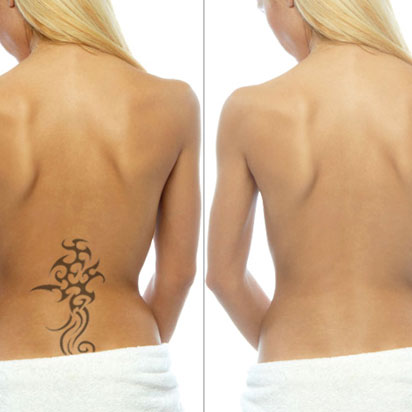 HOW DOES IT WORK?

>Pulses of light are emitted at nanosecond pulse duration.

>The laser light is directed onto the tattoo where the light is absorbed by the tattoo ink.

>This causes a photo-acoustic effect which results from the generation of shock waves following laser irradiation.

>As the pigment is rapidly heated, steam is formed, resulting in dispersion of pigment.

Once the ink has been shattered, the elimination process starts. The fragmented pigment particles may be eliminated either through the epidermis where skin cells and ink are sloughed off, through the vascular system or the lymphatic systems.

The response difference from one client to another likely involves the efficiency of his or her immune system, skin type and colour, the type of tattoo, the type of ink and the maximum amount of pigment removed per session. The more superficial the tattoo pigment is placed and the less the total volume of pigment, the fewer the number of treatments are necessary to remove the pigment.

Lasers have become the standard treatment for tattoo removal because they offer a low risk, highly effective alternative with minimal side effects.

>Sides effects may include transient pigmentary and textural changes; theses usually resolve in 6-12 months but may be permanent.

>If a client is prone to pigmentary or textural changes, longer treatment intervals are recommended.

>Hyper pigmentation is usually mild and transient, and can be treated with topical bleaching agents.

>Hypo pigmentation is also usually transient, but de-pigmentation occurs in about 1% of cases and may be permanent.

Blistering is possible in some cases; if a client forms a blister or crust post treatment, it is imperative that they do not puncture it. Early removal of a blister of crust increases the chances of developing a scar.

Pinpoint bleeding may occur, an antibiotic ointment and non adherent dressing Should be applied following treatment.

Infection is rare as long as the tattoo is treated adequately following treatment.

The risk of scarring is low, it is usually limited to a portion of the treated area.

Patients with a history of hypertrophic or keloid scarring need to be warned of their Increased risk of scarring.